When people talk about a dramatic transformation of the house, that’s what they mean.

Built in 1940, 400 Highland Road began as a typical Cape Cod style house in red and black brick. Situated on a half acre cul-de-sac lot, the home is in a great location in Penn Hills, close to I-376 and the former Churchill Valley Country Club, which has recently been designated a protected green area.

Angela Hess bought the house in 2015 and immediately partnered with her father to begin the renovation. 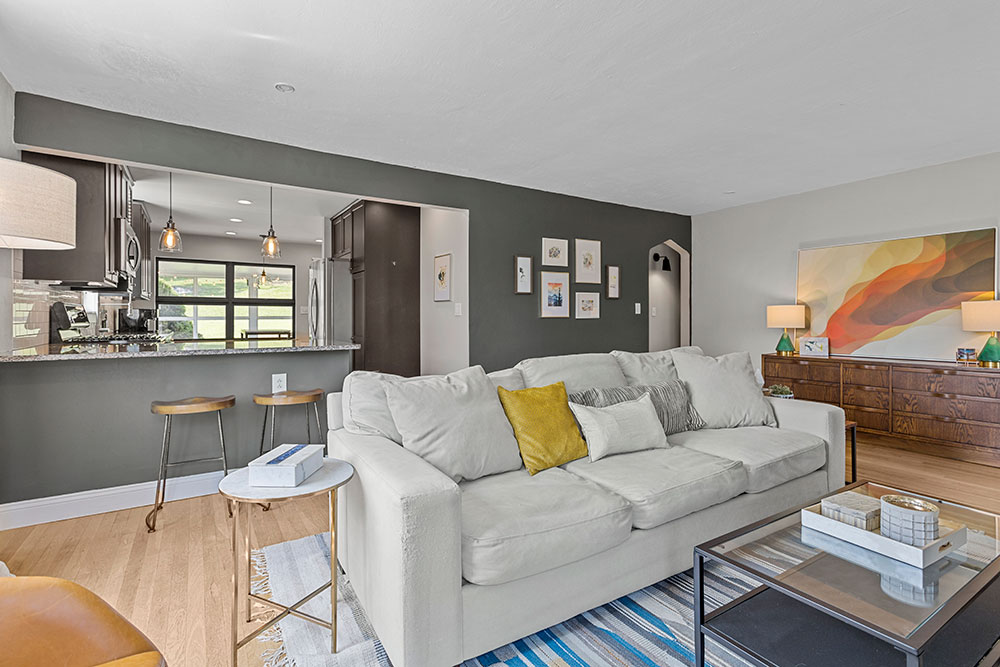 The duo transformed much of the first floor, opening up the walls and reconfiguring the space for a more modern feel. Then Angela fell in love and married her husband Shawn – who immediately took part in the renovations.

“We whitewashed the exterior two years ago,” says Hess. “My husband and I did it ourselves.

These efforts took the house from drab to fabulous over a long weekend. The drab front door was painted a teal blue and the garage door sports a new neutral hue. 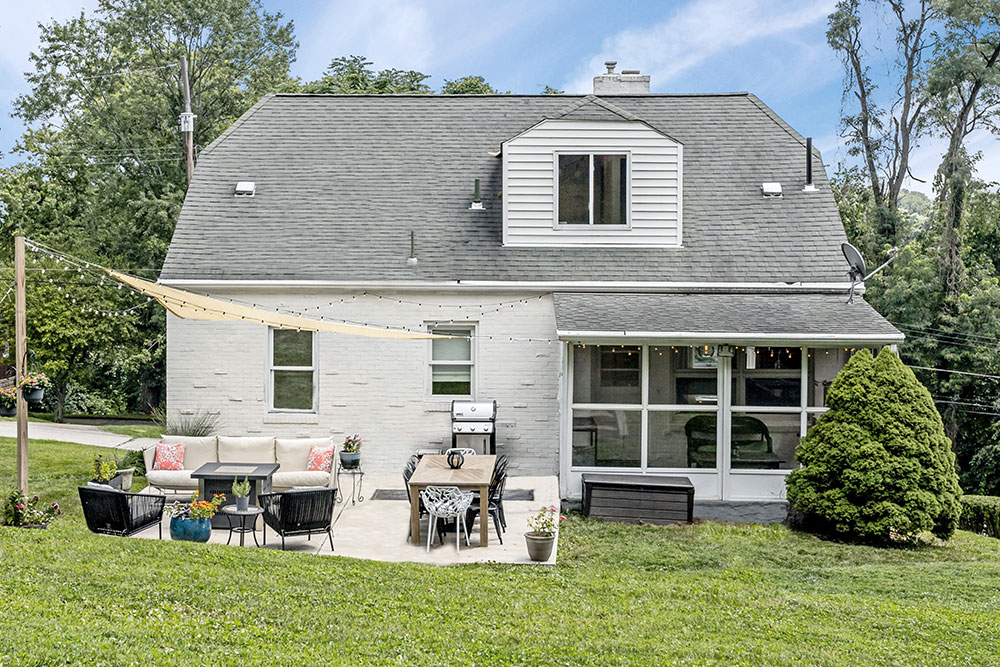 Other exterior upgrades include a new 20 square foot by 20 square foot concrete back patio and a new shed. Both are nice additions to the screened back porch.

“It was original,” Hess says. “We hung some lights and put a rug there. You can change screens and install windows.

Inside, the changes are just as beautiful.

The original entrance had a small cupboard and a ledge stone fireplace. The closet has been removed to create a more open feel, and the fireplace front has been replaced with a more traditional version. The original hardwood floors were also cleaned and polished. 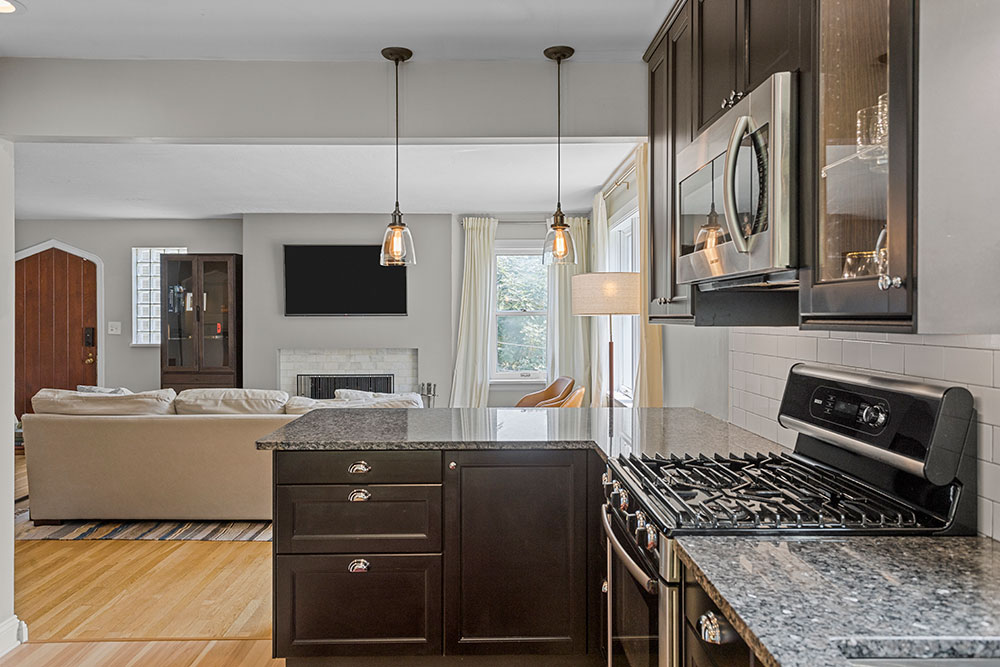 Much of the wall has been removed between the kitchen and living room to make way for a bar counter, new black cabinetry, and granite countertops. Additional seating is available at the back of the kitchen.

Two bedrooms, one of which is converted into an intimate dining room, and a renovated full bathroom complete the first floor. 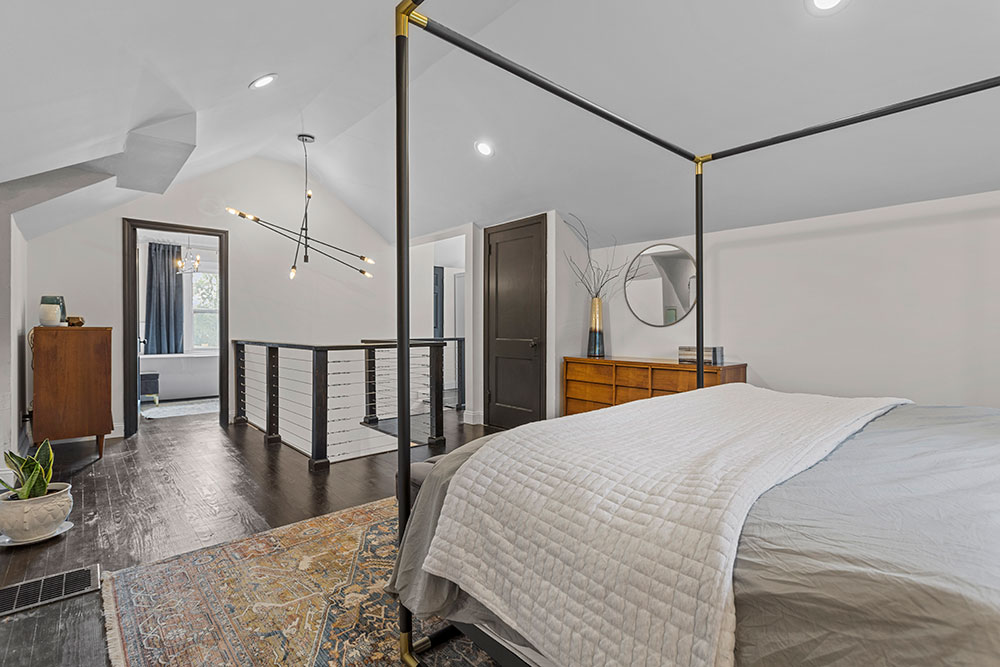 Upstairs, masterful changes have been made to the newly redesigned master suite. At the top of the stairs, the couple installed a modern system of cable and pole rails. They also worked with a structural engineer to raise the roof of the house and expand the previous configuration, which included two bedrooms and a bathroom.

“We turned the entire second bedroom into a full bathroom,” Hess explains. 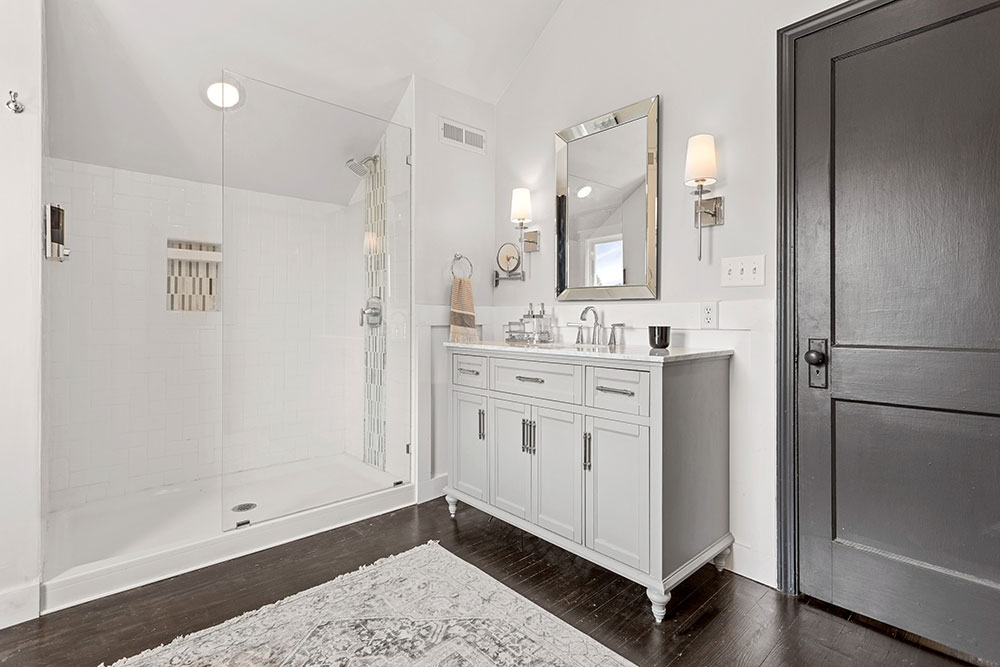 It has a separate walk-in shower, bathtub and white paneling. 60-inch vanity and sconce lighting brings luxury to the space. Underfoot, the hardwood floors were stained with a deep espresso. The new roof over the bedroom has transformed it into a spacious retreat which includes an adjoining walk-in closet and a nice-sized office area.

The couple had no plans to move once the house was completed, but Shawn landed a job in Greensburg and the couple decided to move closer to their job. 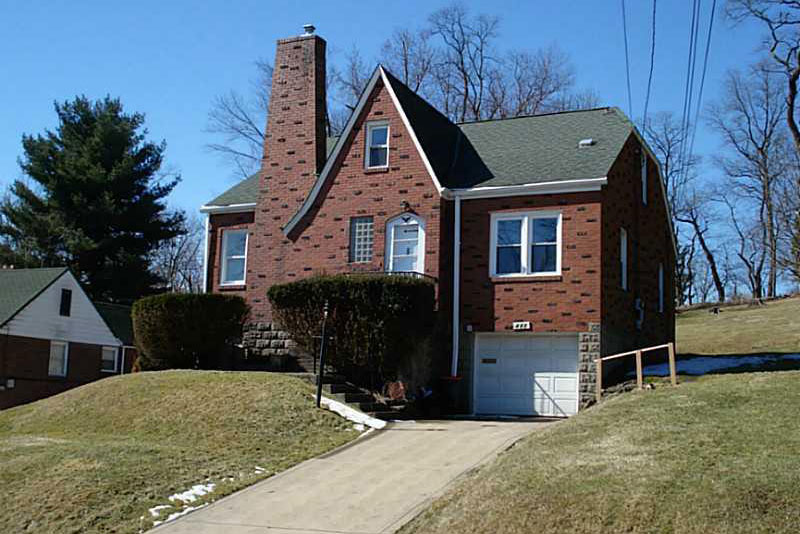 BEFORE: THE COUPLE TRANSFORMED THE HOUSE BY WASHING THE EXTERIOR OF THE RED BRICK WITH LIME

Their renovation shows what can happen when you combine inspiration and sweat equity.

“We had five deals on the house,” Hess says. “It was difficult to decide which one to accept. ”

The couple are now moving on to the next project with their new home, despite some protests from Shawn.

“I promised him we were done renovating for a while, but here we are,” Hess says. “My father and I are the ‘doers’ and he is the assistant.”

Drawing on her years of experience in the area’s real estate industry, Rosa Colucci offers Hot Property, an inside look at the unique and historic homes on the market. Each week, Hot Property passes behind the For Sale sign to share the story of a special Pittsburgh area home. And four times a year, Hot Property provides an in-depth look at the area’s real estate market in Pittsburgh HOME Magazine, tracking home prices and sales, and detailing where hot properties are located. Rosa can be contacted at [email protected].

Planes, Trains & Automobiles: Penn Hills is the second largest township in Allegheny County, and the trip from the airport to the airport can be anywhere from 30 to 50 minutes, depending on the point of departure. Some public transport via Port Authority buses. Some parking lots in the street.

District: The township is nestled in the hills and streams east of Pittsburgh. Several notable neighborhoods have their own identities, including Blackridge, Churchill Valley, Laketon Heights, and Verona Hilltop.